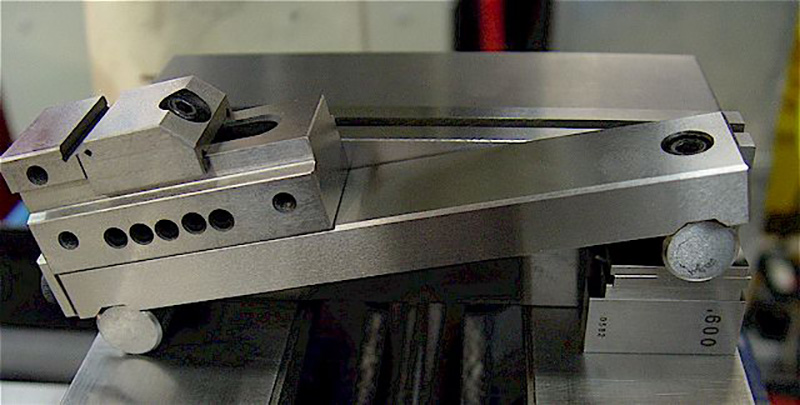 What are sine bars and sine plates used for?

When it comes to measuring angles for parts or for taking measurements of angled parts, the sine bar and the sine plate are incredibly important.

But what are a sine bar and a sine plate? What do they do exactly?

In order to accurately measure the angle or straightness of a part that is not flat to begin with, a sine instrument can be used to even out the surface. Essentially, by placing the object or part being measured onto a sine bar or sine plate, you are able to raise an end to the necessary height thus orienting the object or part in a parallel manner. Utilizing a sine bar or sine plate thus simplifies the overall measurement process when working with angles.

A sine bar itself is a steel bar, made from finely ground or lapped steel, that is typically no wider than 1 inch. At each end of the sine bar is located a precision cylinder that rests against stops machined into the bottom surface. Sine bars can be designed to have upper and lower ends as well as top and bottom surfaces, allowing them to be used in either direction and on either side. In order to hold an object or part in place, there are machined holes along a sine bar into which stops or clamps may be placed. Sine blocks are identical to sine bars, but just slightly wider. 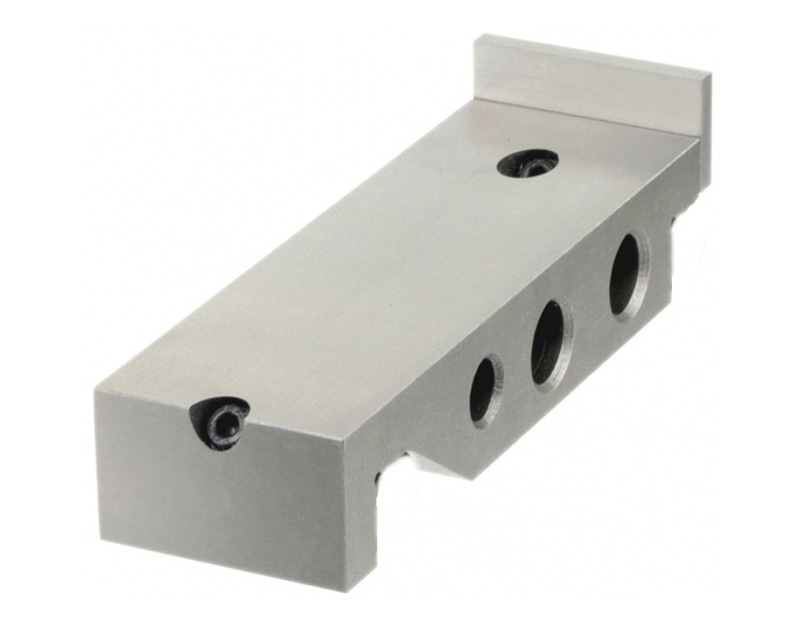 Sine plates are also similar in design, but have a few important differences. A sine plate is much wider in structure (like a surface plate) and connected by a hinge to a base plate at the bottom cylinder. The sine bar, sine block, and sine plate are all used mainly as precision measurement tools, but sine plates are able to be used as fixturing devices as well under certain circumstances.

This triangle becomes the basis for your measurements when using a sine bar or plate, allowing you to calculate an output based on the sine equation, thus giving these tools their name.

The vertical face of the triangle goes through the gauge block and ends at the axis of the upper cylinder. The triangle base will be horizontally above the surface of the bar or plate and end at the axis of the lower cylinder. The hypotenuse of the triangle ends in each of the two cylinders of the sine bar or sine pate and lies parallel to the top surface of the tool. The cylinders of the sine bar or plate are used as contact points during measurements and ensure that the length of the triangle hypotenuse remains stable no matter what angle is needed. Typically, the centers of each cylinder are at a mathematically convenient distance from one another (generally 5” or 10”).

In order to use a sine bar or sine plate, trigonometry must be applied. While mathematically intimidating, the concept of the sine bar and plate is incredibly useful in taking difficult precision measurements and straightforward once you understand the basic principles. Essentially, the purpose of the sine bar or sine plate, and the associated gauge blocks, is to form a precise angle. Central to this process is the triangle ABC which is formed by the sine bar or plate. Any angle ϴ can be set up using the known length of side AB and then calculating the height of side BC using the formula BC = AB x sin(ϴ). Additionally, the angle ϴ is given by the formula ϴ = asin(BC/AB). Because of the complexity of these calculations as well as the multiple moving parts needed to complete measurements using sine bars and sine plates, you will need to be careful when using these tools. The sine bar and sine plate are amazing precision measurement tools when working with angled parts or objects. Knowing how to use these tools properly takes patience and practice.

How are sine bars and sine plates used in practice?

A sine bar and a sine plate are used identically in practice. Using gauge blocks, the sine bar or sine plate is placed at the desired angle, or an angle that matches the workpiece. When placed directly under the upper cylinder, an ABC right triangle prism is formed which then serves as the basis for your measurements. This triangle allows you to apply the sine equation from trigonometry to calculate a range of measurements. This is where sine bars and sine plates get their name. For the now formed triangle, the vertical face ends at the axis of the upper cylinder and goes through the gauge block, the base is horizontal above the surface of the sine bar or sine plate and ends at the axis of the lower cylinder, and the hypotenuse lies parallel to the top surface of the workpiece and ends in each of the two cylinders of the tool. During measurements, the cylinders ensure that the triangle hypotenuse length is consistent during any changes in the angle and are used as contact points during measurement. The most common distances between the centers of each cylinder are 5” and 10” making the necessary calculations more convenient.

How is the necessary gauge block height calculated when using sine bars and sine plates?

The formula Sin B = b/a is used in order to calculate the required height of the gauge blocks needed for measurement. In this formula, B is the required angle, b is the height of triangle, and a is the length of hypotenuse. As an example, let’s say we want to take a measurement of the straightness of a part surface that has a 27° angle from another reference surface on the same part, and we are using a sine bar or sine plate that has 5 inches between the two cylinder centers. Using a qualified calculator, we complete the formula Sin 27° = b/5″ giving us the answer b = 2.270″. Then we know the needed height of the gauge blocks to place under the upper cylinder of the sine bar or sine plate that makes the part surface 27° out-of-parallel with the surface plate. Then, the part surface will be parallel to the surface plate when placed facing the opposite direction and on top of the sine bar or sine plate. From here, we are able to measure the part for straightness, flatness, the accuracy of the angles, or any other number of potential measurements.

How accurate are sine bars and sine plates when taking measurements?

Taking measurements of angled parts and measuring specific angles for different parts can be challenging. Given the difficult nature of these tasks, using sine bars and sine plates to complete these tasks makes them much easier. However, the process of utilizing sine bars and sine plates can be complex and does involve a certain amount of calculation. Keeping all of this in mind, using these tools can be highly accurate, but you need to know what you are doing. The sine values between different angular measurements can change at a rapid rate when at low values and change very slowly when at high values. Due the this, the accuracy that is achieved varies accordingly depending on the angle you are measuring. The degree of accuracy and precision that you are able to have when using sine bars and sine plates is much higher when working with shallower angles than when working with steeper ones. One tip to help address this difference is to use the complement of the angle (90° – x) when doing calculations for angles that are greater than 45 degrees. Overall, the accuracy of sine bars and sine plates is limited due to the complex number of elements involved in completing a measurement and the degree of experience you have with calculating the final measurements. However, these are excellent tools that are indispensable when working with the already complex issue of angled workpieces.

A sine bar is a precision measurement tool built of finely ground or lapped steel, used to measure angles for parts or for measuring angled parts. Typically, a sine bar is no wider than 1 inch and is designed with a precision cylinder located at each end resting against stops that are machined into the bottom surface of the tool. A sine bar is used with gauge blocks to hold the tool at an angle that forms an ABC right triangle. The formed triangle is then used to calculate the angle measurement using trigonometry and the formula ϴ = asin(BC/AB), hence their name.

A sine block is a precision measurement tool built of finely ground or lapped steel, used to measure angles for parts or for measuring angled parts. A sine block is a sine bar that is wider than 1 inch, but not wide enough to be a sine plate. Sine blocks are built and function identically to sine bars.