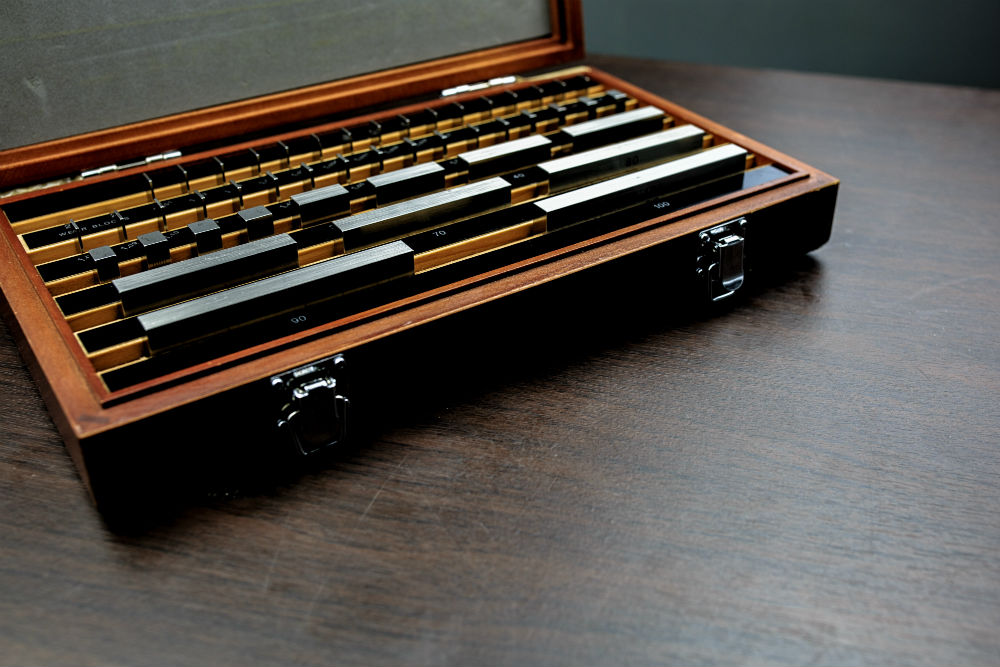 What do the “grades” mean with gage blocks?

To best understand what the grades of gage blocks mean, you must first have a good handle on what gage blocks are and where they came from. Gage blocks are a measurement system of precisely made blocks used to measure exact length. Gage blocks can be made of either ceramic or metal and come in sets of varying lengths. Gage blocks are sometimes referred to as Johannson gages, after their Swedish creator, C. E. Johannson. This clever machinist changed the field of manufacturing by creating gage blocks as a set of predetermined tools that could be combined in a number of ways to create a wide ranging number of required lengths without the costs of having a separate gage for each length. This solution eliminated the need for multiple gages when building complex products or calibrating numerous machine parts.

A signature feature of gage blocks is that they are joined together through a process called wringing. When two opposing faces of two gage blocks are extremely parallel and flat on the surface they can be joined together by a process involving sliding them alongside each other in a particular fashion – this is wringing. A negligible gap results that is about 25nm in size. In fact, the length of each gage block is typically just slightly less than that noted on it in order to account for this additional length post-wringing. Gage blocks are generally calibrated at a resting temperature of 68 degrees Fahrenheit, and need to be stored at this temperature in order to help them retain their high level of precision. Finally, one of the standards for using gage blocks is to attempt to use as few as is required in order to remove any excess potential for measurement error.

Gage blocks seem highly precise in general, right? Well, they also come in different grades, and these grades help the user to determine the specific tolerance of each gage block. The higher the grade, the tighter the degree of tolerance. Broadly, tolerance refers to the limit of variation in a series of properties that is allowed by a particular material. Tolerance can refer to a dimension, a property, or a condition that effects the functioning of the material. Gage blocks that are of a higher grade have a higher tolerance and are therefore often more precise and accurate. Additionally, depending on the thickness of the material, and whether the gage block is made of ceramic or metal, the tolerance within a particular grade may vary slightly.

Grading standards change based on geographic location, but all share the same general regulations. Also, depending on need, different levels of tolerance will be required. Reference blocks are used to establish standards and have a small tolerance measurement of ±0.05 μm. Calibration blocks are used to calibrate inspection blocks, as well as in gauging that requires very high precision, and have a tolerance ranging +0.10 μm to −0.05 μm. Inspection blocks are used for standards in a toolroom in order to set other gauging tools, and have a tolerance ranging +0.15 μm to −0.05 μm. Finally, workshop blocks are used as the shop standard for precision measurement requirements and have a tolerance ranging from tolerance +0.25 μm to −0.15 μm. More recently, the U.S. Federal Specification designated gage block grades as follows: 0.5 as equivalent to grade AAA, 1 as equivalent to grade AA, 2 as equivalent to grade A+, and 3 as a compromise between grade A and grade B. Using grade designations based on the AAA, AA, A, and B levels is outdated and no longer seen. The 0.5 – 2 range is what is typically used when defining grade.

Gage blocks with different grades will be required for different types of precision measurement jobs. Additionally, depending on the grade of your gage blocks, the regularly required recalibration period will change, ranging from as often as monthly to as infrequently to annually or every 2 years. Gage blocks are amazing little tools. Knowing the grade of what gage blocks you require is crucial to accurate measurement, and knowing what those grades mean is an important place to start.